I’ve been researching the various ways authors include food in their writing.  Some authors weave the recipes right into the story, others mention the food and then include recipes in the book.  While that seems like it would narrow the options down to just two, each author does this in their own unique way and I’m enjoying this exploration very much.

One example is the memoir Blush: A Mennonite Girl Meets a Glittering World that I have written about before.  This book has inspired me a great deal, and I even had lunch and a delightful conversation with the author, Shirley Showalter.  That was FUN!  (Authors are So Cool!)

In her book, Shirley mentions food and she includes special recipes at the end of the book.  There were two recipe that caught my attention, one was for a Beet Pickle and the second was for Pickled Red Beet Eggs that uses the brine left from the pickle a second time, to pickle the eggs.  The more I thought about these pickled eggs, the more I began to crave them.  But without the leftover brine from the pickles… and beets aren’t in season… how?

Then I thought about the pickled eggs we used to serve at our restaurant.  The other day I discovered a whole banker’s box full of recipes left from our restaurant.  I even found the blue book of hand written recipes that was the reference book for my husband’s sandwich shop that he ran alongside his pipe organ business before I was a part of his life.  I was delighted to find this box and as I sorted the recipes I found my long forgotten recipe for pickled eggs that we used in our restaurant.

But before I go on about those beautiful eggs, let me share a little morsel from the book:

“In the 1950’s a few hobos still traveled the countryside, although most of them had disappeared after the Depression and World War II. I remember Mother making a delectable meal for one man who knocked on our door.  She cooked up fried chicken, mashed potatoes, gravy, green beans, bread and butter, and home-canned peaches, along with chocolate cake for dessert.  I could tell she was also a little afraid.  As she confided afterward, she had heard that sometimes hobos set fire to barns, but she swallowed her fear after looking at the hungry man in front of her.  She wanted to make him a meal he would enjoy, one that would stay with him until he met another generous farm wife down the road.  The man ate the meal on the porch, sitting on a rocking chair.  Henry and I played in the yard, watching him from the corner of our eyes.  When he had eaten every morsel, the man returned the plate to Mother and thanked her.  ‘You’re a good cook, Ma’am, he said.’”

Even through her fear she chose to be generous, and she cooked a real meal for the “hobo” knowing it might be a while until he had another.  Everything about this meal shows a woman walking in Grace and making the road a little gentler for her fellow travelers.  Brava!

Put two dozen eggs in a roomy pot and cover with water.  Bring to a rolling boil, then remove them from the heat, cover them, and set the timer for 14 minutes.

When the timer rings, drain the hot water and rapidly cool the eggs in cold water.  When the eggs are cool, peel them gently and place each dozen in a quart canning jar.

To the quart jars with the eggs add two gloves garlic and 1/2 T pickling spice per jar plus a healthy pinch of salt.
Then…

Fill the bottom half of the egg-packed jar with the beet/onion juice and fill the rest with vinegar and cover. 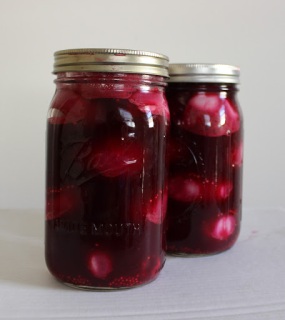 Allow them to sit in the fridge for a few days until the color and flavor seeps through the egg white.
Ok, I know that’s the advice to give, but mine were in the brine
only a few hours before I could NOT TAKE IT ANY LONGER.
I ate the first egg.
It was yummy!
(If this is wrong I don’t want to be right)

Helpful tip: I use this brine over and over for lots of eggs.  I boil a new batch of eggs, pack the jar, pour in the brine, and just top it off with vinegar.  The eggs will continue turning out delicious and colorful, and a little lighter in color each time.   And pickled eggs are yummy straight from the jar, and they make a delightful addition to a cob salad!

BTW, I’m posting these Blushing Eggs (see what I did there?  The title of the book is “Blush” and I’m talking about pickled eggs, lol, I amuse myself!) in conjunction with Novel Food by Simona Carini.  Drop by over there to see all the links to delicious food inspired by a published literary work!  I’ve been a part of Simona’s collection in the past and seriously, the Novel inspired food from creative cooks all over has been absolutely spectacular!  Last time there was a guy who wrote about pots de creme from Proust.  The very idea is swoon-worthy!

A shout-out to generous cooks everywhere, especially the kind who feed our modern day ‘hobos’!

Stay Tuned (I might just share the recipe for “Sherando Salad” – the best-selling salad that we sold in our restaurant.)

It is my intention to wrestle in the style of Jacob… to question in the style of the woman at the well (whose name we are not told) and to do so with as much authenticity as I dare, and hopefully… to dare a great deal. I am determined to become brave, shameless, and powerful of voice, and I invite you into this conversation!
Previous Post
Next Post